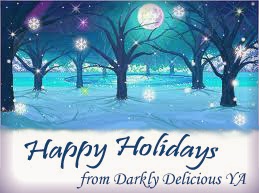 Today’s holiday secrets are from Wendy Russo, author of January Black. You can learn more about Wendy and her book by clicking here.

1) What Inspired The New Years Eve Scene in January Black:

The gardeners on Aventine's capitol hill have a tough job. They work for people who don't touch dirt, or things that touch dirt, or things grown in dirt. Throughout the year, the gardeners collect the debris from the flower beds...petals and leaves that had wilted or fallen. Now, because this kingdom doesn't celebrate religious holidays, New Years Eve is the biggest party of the year. I wanted the kingdom's contractors to have a special tradition that was fun, beautiful, and defiant of the strict world they worked in. At the stroke of midnight, they dump sacks of the flower bed debris from the roofs of the labor campus dormitories. Rotary fans blow it into a blizzard onto the revelers below.

Matty and Iris have their first kiss in a shower of dried flower petals. It's one of my favorite scenes in the book.

2) Favorite Holiday Movie: Emmet Otter's Jugband Christmas. I remember that it used to be on TV every year at Christmas. I looked forward to it. Oddly, now that technology has made it possible to watch it anytime I want, I've never even gone looking for it. I can't even remember the last time I watched it. And I think it's sad that it's not still on the basic cable Christmas schedule.

3) I love the holidays for a lot of reasons. Family time. Pretty lights. Food. Happy kids. But, it also connects me to a part of my childhood that's lost to me. In my 20s, I gradually lost my religion, and over the course of my 30s, I've become essentially text-book agnostic. Christmas fills the holes of ritual and tradition that were created when I left religion behind.

4) Best Christmas gift was from Santa in 1983. It was a small stereo I got when I was 9 years old. Silver, totally non-flashy. I had it with me until my second year of college, when my 3-yo cousin cut the power cord in half with a sliding glass door. I bought a CD player/tape deck stereo with detachable speakers to replace it.

Posted by Darkly Delicious YA at 7:00 AM