A chat with agent Jeff Ourvan of the Jennifer Lyons Literary Agency!


A chat with agent Jeff Ourvan of the Jennifer Lyons Literary Agency...hosted by Kat Ross 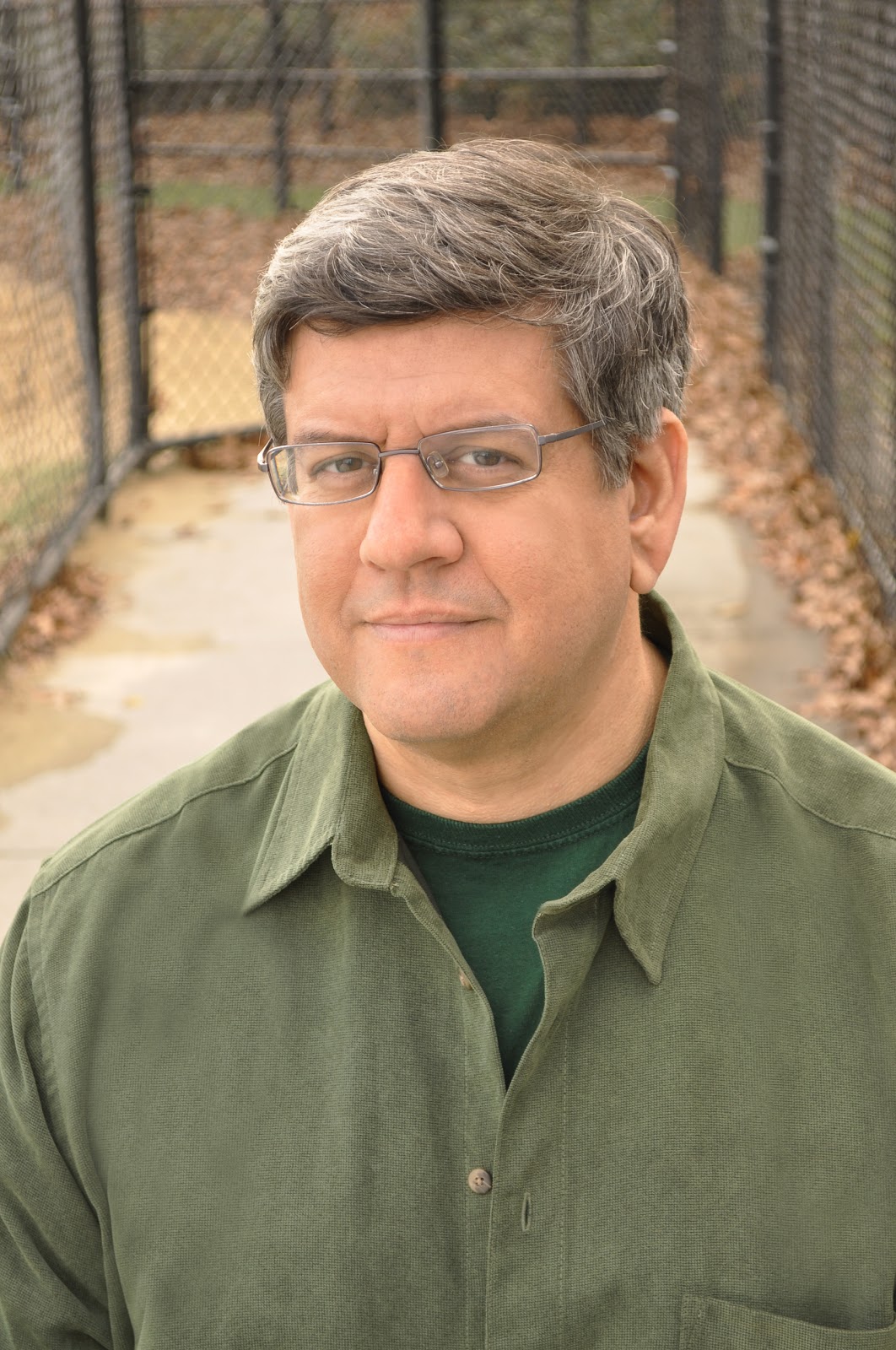 1. What made you want to be an agent?

I'm an attorney with a background in creative writing, magazine editing and communications, so it brought together my strengths and everything I love to do.

2. What advice would you give aspiring authors? OR What elements are MUST HAVES in a story you’d ask to see more of? What makes you go the next step to wanting to acquire?

It depends on the genre, but in fiction I look for plot-driven tension and suspense, plausible motivation, complex and imperfect characters and at least one truly sparkling sentence on each page. For nonfiction I'm looking for the same elements -- together with excellent research and a compelling issue or story to explore. Aspiring writers most need to be courageous. Not just in their writing but in living their lives.

3. Besides basic grammatical errors and writers sending stories in genres you don’t represent, what are most common problems with the submissions you receive?

There isn't a strong market for a lot of what people seem to want to write.

4. What’s on your wish list? AND/OR What have you seen too much of?

I'm mostly looking for narrative nonfiction, as well as sports and science books. Also I'm always on the lookout for clever young adult fiction. I'm seeing way too many YA fantasy narratives that all look too familiar.

AND NOW FOR SOME DARKLY DELICIOUS QUESTIONS....

2. Last book that made you cry / laugh hysterically?

I just read an unpublished ms called "Napoleon's Hairdresser" that sends up the historical romance genre and had me rolling on the floor.

4. Top three books you’ve read in the past year that were not from one of your clients?

The Sleepwalkers, by Christopher Clark; The Death of Bees, by Lisa O'Donnell; The Elements of Style (an annual read).

The ceviche at Cafecito, on Avenue C in Manhattan.

Thanks for joining us today!

Jeff is currently accepting submissions, the guidelines can be found here.

Posted by Darkly Delicious YA at 3:00 AM 6 comments:


I’m a complete and total pantser.

No notes. No outlines. No character sketches. No computer programs to help me organize my thoughts and drafts. I just sit down and write.

I make lots of great discoveries this way. But I also produce really messy first drafts.

Now, before seeking publication, I whip my drafts into shape. I revise rigorously. I try to plug all the plot holes, resolve the inconsistencies, deepen the character relationships, all that good stuff. To a certain extent, I like to believe I succeed.

But I still swear by agents and editors to help me polish and—so far as possible—perfect my work. In the case of my debut, Survival Colony 9, my agent and editor have played very different but equally vital roles. My agent, Liza Fleissig, acted more as a lay reader: she told me what didn’t make sense, what sounded bad, what she liked and didn’t like. That was invaluable to me, as it enabled me to get a feeling for how readers would respond to the story I was trying to tell.

My editor, Karen Wojtyla of Margaret K. McElderry Books, served as more of a critical reader: she spotted logical flaws in the world-building, pinpointed structural problems in the plot, challenged me to rethink the story’s climax. She helped me to draw out deeper thematic resonances that must have been in my mind but that I needed a professional’s eyes to see clearly.

Many writers swear by beta readers and critique groups. For whatever reason, I’m much more comfortable working one-on-one with an agent and editor. They get me, and I get them.

Ultimately, I don’t think it matters where a writer seeks her/his feedback—as long as s/he seeks it. Writing may be solitary, but publishing is anything but.

Bio:
I've been writing novels since I was eight years old (though admittedly, the first few were very, very short). I taught college for twenty years, wrote a bunch of books for college students, then decided to return to writing fiction. SURVIVAL COLONY NINE is my first novel, but the sequel's already in the works!  I love to read (mostly YA fantasy and science fiction), watch movies (again, mostly fantasy and sci-fi), and spend time in Nature (mostly catching frogs and toads). I'm the world's worst singer, but I play a pretty mean air guitar.  Oh, yeah, and I like monsters. Really scary monsters.

I honestly don’t know a single author who hasn’t had writer’s block at least once in their career. Most of the time it’s a regular occurrence. For me it happens every novel, generally around the same point each time. I wish I had the recipe for some magical writing potion you could brew….wait….coffee anyone? For each author, breaking the block is different. So even if I did tell you to spin around twice and chug a Pepsi while holding your breath, chances are you’d just end up really dizzy and bloated.

What works for me is simple. I sit my butt down in front of the computer and force my fingers to type regardless of whether or not I like what I’m writing. Getting the content out is the hardest part. Like Anne Lamott says:

The first draft is the child's draft, where you let it all pour out and then let it romp all over the place, knowing that no one is going to see it and that you can shape it later. You just let this childlike part of you channel whatever voices and visions come through and onto the page. If one of the characters wants to say, "Well, so what, Mr. Poopy Pants?," you let her. No one is going to see it.

Now, practically even better news…All good writers write them. This is how they end up with good second drafts and terrific third drafts.

If you haven’t read her novel, Bird by Bird, you’re in for a treat (especially if you’re a writer). It’s titled based on a memory she has of her brother who waited until the last second to write an essay about birds when he was a child. Her father, an author, told him to take it bird by bird. This philosophy has helped me in writing every single sentence in my books. Some days I take it sentence by sentence. Others, page by page. Writing 300 pages seems so daunting, but if you take it “bird by bird” ….well, you end up with a book.

What helps you get through the process of writing?
Posted by Darkly Delicious YA at 3:00 AM 5 comments:

Ruby's First Scene from My WIP, Glitch by Wendy Russo

Parvana’s song faded out to let the dramatic opening chords of The Phantom of the Opera play through. Ruby rolled her eyes and inhaled sharply at the sound of the ringtone. She reserved that tune for Lorelei.

She paused with her finger over the “Ignore” link as the Phantom banged the organ keys again. A photo of two girls hugging each other cheek to cheek lit up her phone screen. Lorelei was the ginger on the left. She didn’t leave the house without lots of make-up hiding her freckles. Between the flash and the green lighting in the room at the moment they snapped the selfie, the girl appeared ill. Ruby’s coffee-and-cream skin fared better. Green light shifted it toward olive and made her Asian traits stand out more than usual.

She smiled a little at the photo, just for a second. They snapped it at the back-to-school dance, before everything changed.

The Phantom’s chords repeated a third time. She mulled letting the call go to voice mail. Sighing heavily, Ruby pressed her thumb down on “Answer”.

“Roo! I’ve been texting you. Why aren’t you answering?”

Because texting means you want something and I’m busy. “My phone’s muted. I’m at the hospital.”

“Oh, okay.” Hearing relief in the girl’s voice, Ruby glared at the phone. “The committee's meeting at 7:45. Usual place. Don’t be late.”

Suddenly, Ruby remembered why she and Lorelei rarely spoke these days. Micah slept in a hospital bed. His mother blamed her for his seizure. Her parents had kept quiet so far, but their faces said it all when they learned the boy collapsed in their kitchen. She broke a rule and they were not happy about it. On top of that, the Advanced Placement Chemistry test would hit Ruby’s desk in ten days and she wasn’t remotely ready for it.

A best friend helped girls get through problems like these, but Lorelei didn’t know about any of them. A question and a minute would get them caught up, but no. Prom mattered more.
She supposed she should feel flattered. Lorelei needed her to help solve a problem. She knew the girl too well to believe it. There were a dozen people on the committee, and if the Devil offered his hand, Lorelei would ditch them all and run off with him.

“I’ll be there.” She wanted to tell Lorelei to kiss off, but held her tongue. The call terminated on the other end.

Ruby removed the earbud from Micah’s ear, then her own, and wrapped the thin cables around her fingers before shoving them into her front pocket. She slipped her phone into a back pocket and then leaned over to kiss sleeping beauty’s cheek.

She grabbed her book bag and swung it over her shoulder as she spun around toward the door. There she stopped. Looking back at the last minute, she bit down on her lip and thought, Please wake up.

Glitch is the first book of a YA Science Fiction Romance series, set in an alternate timeline, that meshes the angelic war, high level string theory, and immigration policy to turn Lucifer's story on it's ear.
Posted by Darkly Delicious YA at 3:00 AM 1 comment:


Splash into summer with great books from your favorite YA authors! 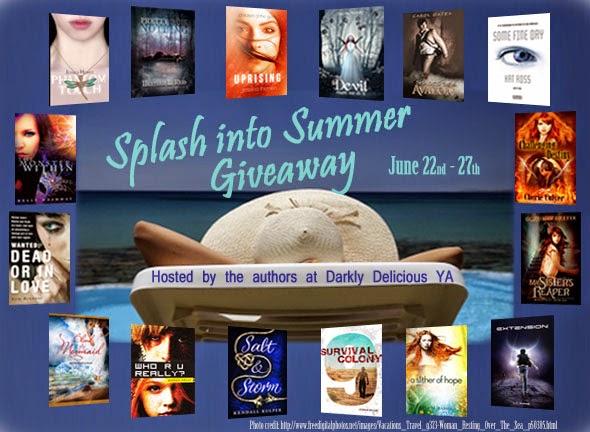 The authors at Darkly Delicious YA have banded together for a huge giveaway. With lots of fun prizes, there's something for everyone.

One lucky winner will receive a $40 gift card.

Plus there are lots of other amazing prizes from the authors at Darkly Delicious YA.

Posted by Darkly Delicious YA at 3:00 AM No comments: