Tuesday Teaser from My Sister’s Reaper by Dorothy Dreyer

Today I’d like to share with you a teaser from my debut novel, MY SISTER’S REAPER. The sequel is coming out in a couple of months, so hopefully this teaser will strike up your interest and persuade you to get the second book as well. 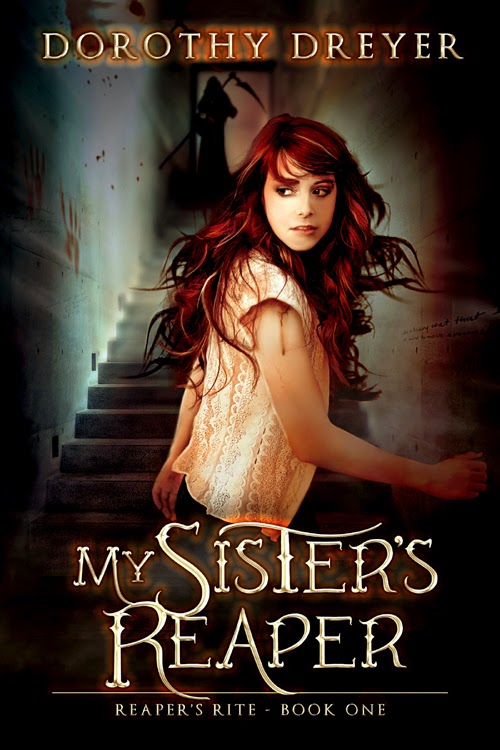 Here’s a little more about MY SISTER’S REAPER before we jump into the excerpt:

Sixteen-year-old Zadie’s first mistake was telling the boy she liked she could bring her dead sister back to life. Her second mistake was actually doing it.

When Zadie accidentally messes with the Reaper’s Rite that should have claimed her sister Mara, things go horribly wrong. Mara isn’t the same anymore—Zadie isn’t even sure she’s completely human. To top it off, a Reaper is determined to collect Mara's soul. Now Zadie must figure out how to defeat her sister’s Reaper or let Mara die … this time for good.

I almost didn’t see her. The room was still, and I’d turned to head up the stairs. But something by the kitchen island caught my eye. Something that shouldn’t have been there. A shoe. Mara’s leg, sticking out from behind the counter. I circled the island to find out why she was sitting on the floor and came face to face with a large knife.

Mara was in a tank top, running the serrated blade in a slow line near her shoulder. The cut ran just along the surface of her skin, blood oozing from the broken skin and staining her top. I gasped, and Mara looked up at me with a tear-streaked face.

I dropped to my knees and grabbed her hand. “Mara!”

“I have to.” She pulled away, stronger than I thought. “He wants the pain.”

She twisted away from me, her eyes wild as she dug the knife into her shoulder. This time deeper. Lines of red ran down her arm. I grabbed her wrist and used all my might to separate the knife from her skin. She screamed, her teeth bared like some kind of untamed animal. My eyes darted around the room, searching for unusually dark shadows.

I felt desperate, my voice pleading when I said, “Mara, I’m trying to help you.”

“Just let go of the knife!”

“You don’t know what he wants from me! You have no idea!”