The Dark Deliciousness of WORKING WITH EDITORS By Kate Evangelista

In high school, I wrote without any thought to editing. Using my father’s electric typewriter (and I’m totally showing my age here), I wrote whatever popped into my head. Well, let me clarify. I start with a story in mind then write what comes naturally to me in connection to the story. Afterwards, horrible spelling and wrong grammar notwithstanding, I’d bind my stories and bring them to school for my classmates to read. No editing necessary.

Starting my writing career this way helped and hindered me. It helped because today I’m able to construct my novels a chapter at a time based on an overarching storyline. I have a beginning and I have the end then I fill in the blanks in the middle. This assures a tighter plotline. For me, anyway. It hindered because I had no concept of editing whatsoever. This messes with the ego because I automatically thought my work didn’t need changing. It’s not perfect, but that’s how I intended to create it. Budding writers out there don’t start out this way. *wags finger*

This terrible mindset followed me well into my early twenties. I stood by my work and hardly listened to anyone’s feedback. Maybe this is also because the critique groups I did participate in would nitpick rather than give actual constructive criticism. Oh, they thought they were being constructive. Hell, I thought so too. It’s only now after working with a variety of editors that I can distinguish between what is considered constructive (i.e. what will help improve the story) versus your run of the mill nitpicking (i.e. the negative stuff).

For some of you who might not know yet, I’m currently published by three different publishers. This is no accident. I intentionally submitted to different publishers because I wanted to learn more about my craft. Working with as many editors as possible certainly helps.

Many writers abhor the editing process for many different. I’ve seen many cry over it. I understand it can be intimidating and that comments can be seen as criticism of one’s work. I’ve come to believe that editing is the best part of the process. It can be taxing, for sure. But it is also the most rewarding because you already have something to work with.

When writing, you’re forced to fill a blank page with words. Basically, you need to translate what’s in your head onto paper. With editing, you already have everything on paper, which takes the edge off. Now your job becomes improving on what you already have. And the best thing about it is you have an editor who helps guide you in the right direction.

For my debut novel, Taste, the comments of my editor for the first two pages alone were longer than the actual two pages. In fact, every sentence had multiple comments attached to them. Here’s a picture of what I mean: 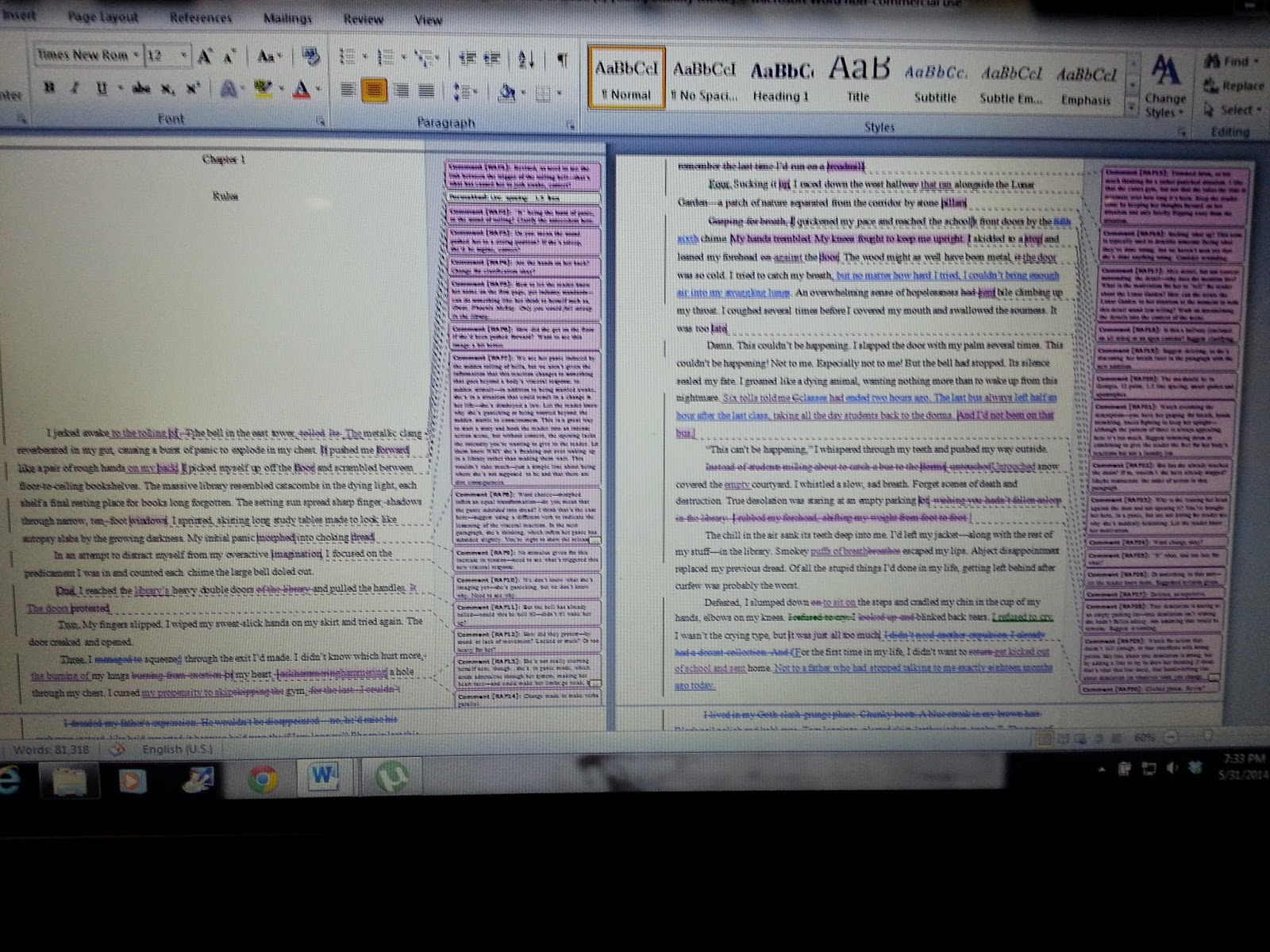 Looking at this picture today doesn’t fail to bring out a cold sweat in me. How I survived that initial editing process is beyond my reasoning skills. But I can honestly say that my editor really helped make my writing better. Many readers don’t get a glimpse of what goes on during the editing of a novel. The final product you have in your hands is leaps and bounds beyond how it all started.

Now, let me show you a picture of the first two pages of Savor, one of my latest novels, during the editing stage: 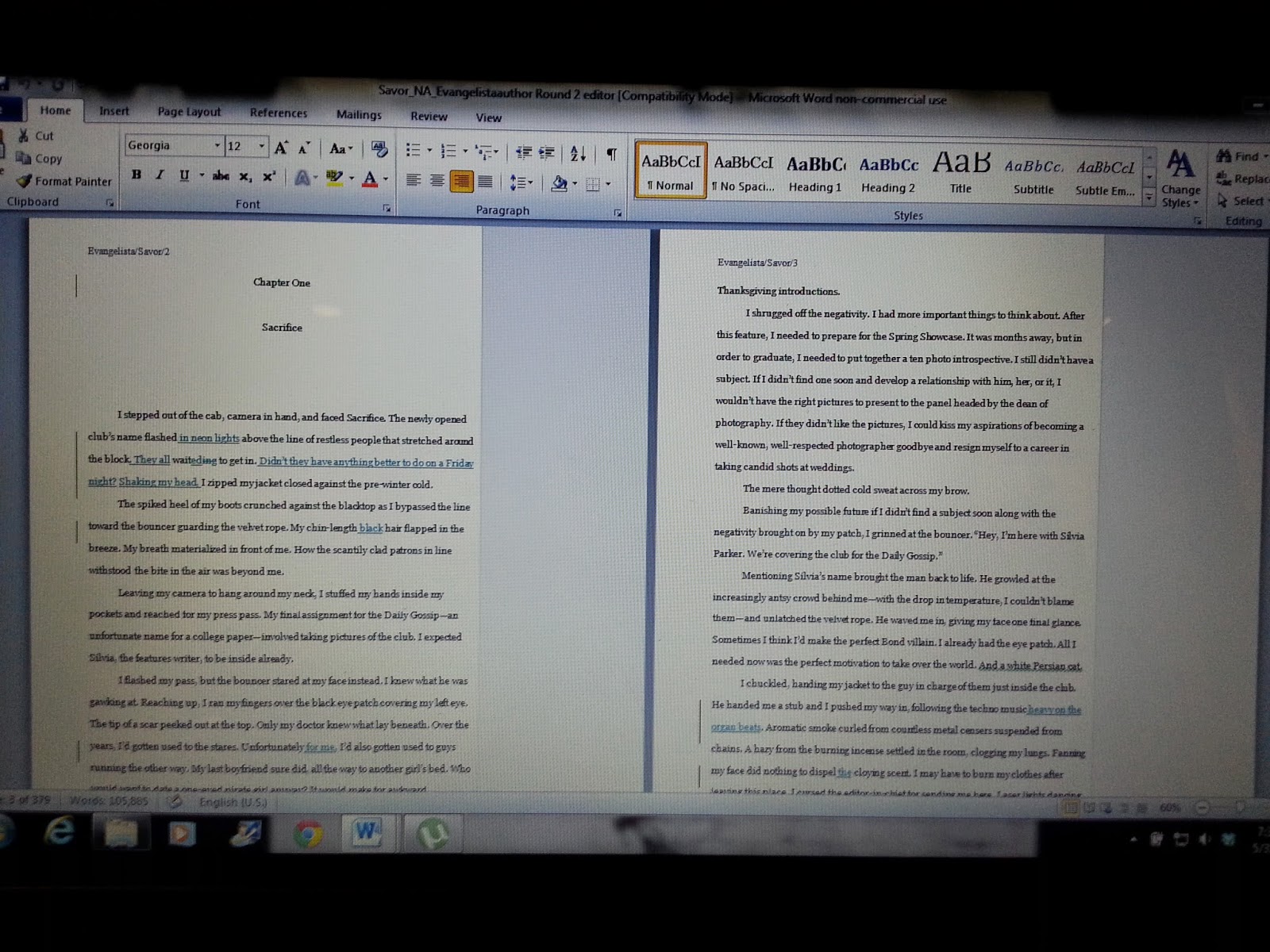 Here you no longer see any comments, just some tweaks by my editor on some of the sentences. Taste is my debut and Savor is my sixth novel (fifth to be published). The difference in editing is vastly obvious because each of the editors I’ve worked with since my debut helped me hone my craft. If you want to see the progression of the improvement in my writing based on editing, this is how you should read my novels: start with Taste then move on to Reaping MeSoftly then to Til Death followed by Romancing the Bookworm before Unreap My Heart and end with Savor. The dates of publishing vary, with Til Death being the most recent release. But like what I mentioned above, Savor is my latest in terms of what I’ve written and edited (it shows the most improvement).

With each novel I write, I try my best not to make the same mistakes that my editors have pointed out in previous novels. Of course, there’s no such thing as a novel that doesn’t need editing. From experience, the process gets easier because when you know better you do better (ßMaya Angelou quote).

So, working with editors is actually awesome. They are there to support you as a writer and help you improve your craft and nourish your talent. They are also there to push your limits, demand better of you, and show you avenues into the story you didn’t think possible during the writing process.

In short, I’m an editing junkie. I want more. No. Need more.

Bio:
When Kate Evangelista was told she had a knack for writing stories, she did the next best thing: entered medical school. After realizing she wasn't going to be the next Doogie Howser, M.D., Kate wandered into the Literature department of her university and never looked back. Today, she is in possession of a piece of paper that says to the world she owns a Literature degree. To make matters worse, she took Master's courses in creative writing. In the end, she realized to be a writer, none of what she had mattered. What really mattered? Writing. Plain and simple, honest to God, sitting in front of her computer, writing. Today, she lives in the Philippines and writes full-time.

If you want to know more about this quirky writer who loves romance and fantasy and everything in between, click here.
Posted by Darkly Delicious YA at 3:00 AM