The Darker Side of Cutting Characters, or How I Learned to Stop Worrying and Kill My Darlings by Jessica Hawke

There is a much-loved quote by William Faulkner – “In writing, you must kill all your darlings.” Now, I suppose you could take this literally and kill off everyone that a reader could possibly love.

(I’m looking at you, George R.R. Martin. You too, Suzanne Collins. You sit in a corner and think about what you’ve done. This is why we can’t have nice things.) 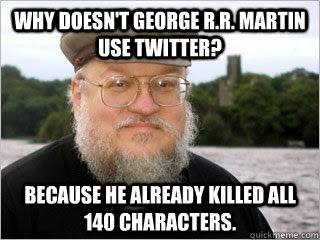 However, I think a less literal interpretation is a little closer to what Faulkner meant.

As we write, we can grow emotionally attached to the elements of our story. Maybe it’s a character that we adore or a scene that seems so perfect that it should be in writing manuals as an example of impeccable writing. You know you’ve done it. You’ve written that one flawless sentence that should be engraved in gold and preserved for all eternity as manifested genius.

And don’t get me wrong - it’s not a bad thing to appreciate your own writing. It’s a nice change from the usual negative commentary that we face. However, when we become overly attached to these things – our “darlings” – then we have a hard time editing them out, even if they aren’t serving their purpose. A beautiful sentence is worthless if it doesn’t fit the story, like handing a flawless diamond to someone dying of thirst. It’s just a heavy rock that they don’t need.

Or we can get really Zen about it with the koan:

If you meet the Buddha on the way, kill him.

This isn’t supposed to inspire violence against Buddha, but rather an admonition to cut attachments that would hinder your path to enlightenment. I think it transfers well to writing. Instead of heading toward enlightenment, we’re striving for the best version of our story that we can write. This means we have to cut any elements that weigh it down.

I’m actually facing this right now in my WIP. My dear friend is my beta reader, and while she liked the story and the voice, she was pretty sure there were too many secondary characters.

They are wonderful characters and I’m quite sure that Tumblr would develop a massive fandom for them! *cough*

The main character spends the first two chapters in the company of a delightfully colorful sidekick. He’s a deep-fried, whiskey-marinated redneck with a gambling problem and a heart of gold. What’s not to love? And then there’s the tough, world-wise preacher who’s far too handsome for his own good. He’s a holy man crossed with a Hell’s Angel, and he’s just about the only person who gets my tough-as-nails MC all aflutter.

I adore both characters, but my friend had a point. It wasn’t that they weren’t developed. Both characters had distinct personalities, and they were both fairly memorable. But the first half of the book basically had a revolving door. These guys came and went and didn’t contribute anything major to the plot.

Redneck Guy was more set dressing than anything else. He establishes the situation – not good – that the MC is in at the beginning of the story. Then he disappears after Chapter 2 and only reappears via phone call in the back half of the book. His only major contribution could have been done by literally anyone else in the book.

Preacher Man was only slightly more significant. He first appears around Chapter 6 to give the MC some sage advice and stir up an old crush, and then is off-stage until the very end of the book. Like Redneck Guy, he doesn’t do anything that can’t be done by someone else.

Furthermore, the book already has a fair number of minor characters. It follows two main characters solving a mystery, so they encounter a number of suspects, witnesses, and law enforcement officials. Each one of them either takes some action that pushes the plot along or contributes information that helps solve the mystery.

Preacher Man and Redneck Guy, as lovable as they were, didn’t do either. Sadly, these darlings had to go.
Now that I’m editing, I’ve given them their pink slips. Redneck Guy actually makes a brief cameo, and he’ll hopefully show up in another book. I’m avoiding Preacher Man by having the protagonist simply not return to her hometown to see him for now.

It’s difficult to cut a character. I’m a hardcore outliner when I write, and when I first envisioned this book, it involved both of these darlings. Obviously, they seemed important at the time. I mean, why would I have come up with them if I didn’t think it was the best way to tell the story? And with all the time spent on a first draft, it’s easy to become attached to them. But if they’re not doing their job, they have to go. A story grows and twists as you write it, and you can’t be afraid to follow where it leads.

I was going to offer some advice, but Margo wrote an absolutely fantastic set of questions to ask yourself if a character needs to go. So, I’m going to defer to her awesomeness and direct you there for more advice. (Hyperlink to Margo’s post: http://darklydeliciousya.blogspot.com/2014/04/the-darker-side-of-cutting-characters.html)

Don’t be afraid to cut those ties. If your darling is dead weight, then push them on out of the boat Dexter-style. If you meet your darling on the road, you must kill the darling.