So this was a little tough, largely because I'm still in the middle of revising key parts of the book! But my editor and I agreed that there are plenty of polished scenes ready for an excerpt.

This one is toward the end of the first chapter. Our main character, Jansin, has never seen the sun. She lives in an underground city-state called Raven Rock. Her dad, a general, has just arranged for the family, plus Jan's boyfriend Jake, to go to the surface on holiday for the very first time. She's never been inside a mole before but she knows how they work: back end a simple pod with seats, front end a boring machine that drills through rock and dirt and whatever else gets in its way.

Jansin doesn't know it, but this vacation is about to go wrong in ways that will change her life forever… 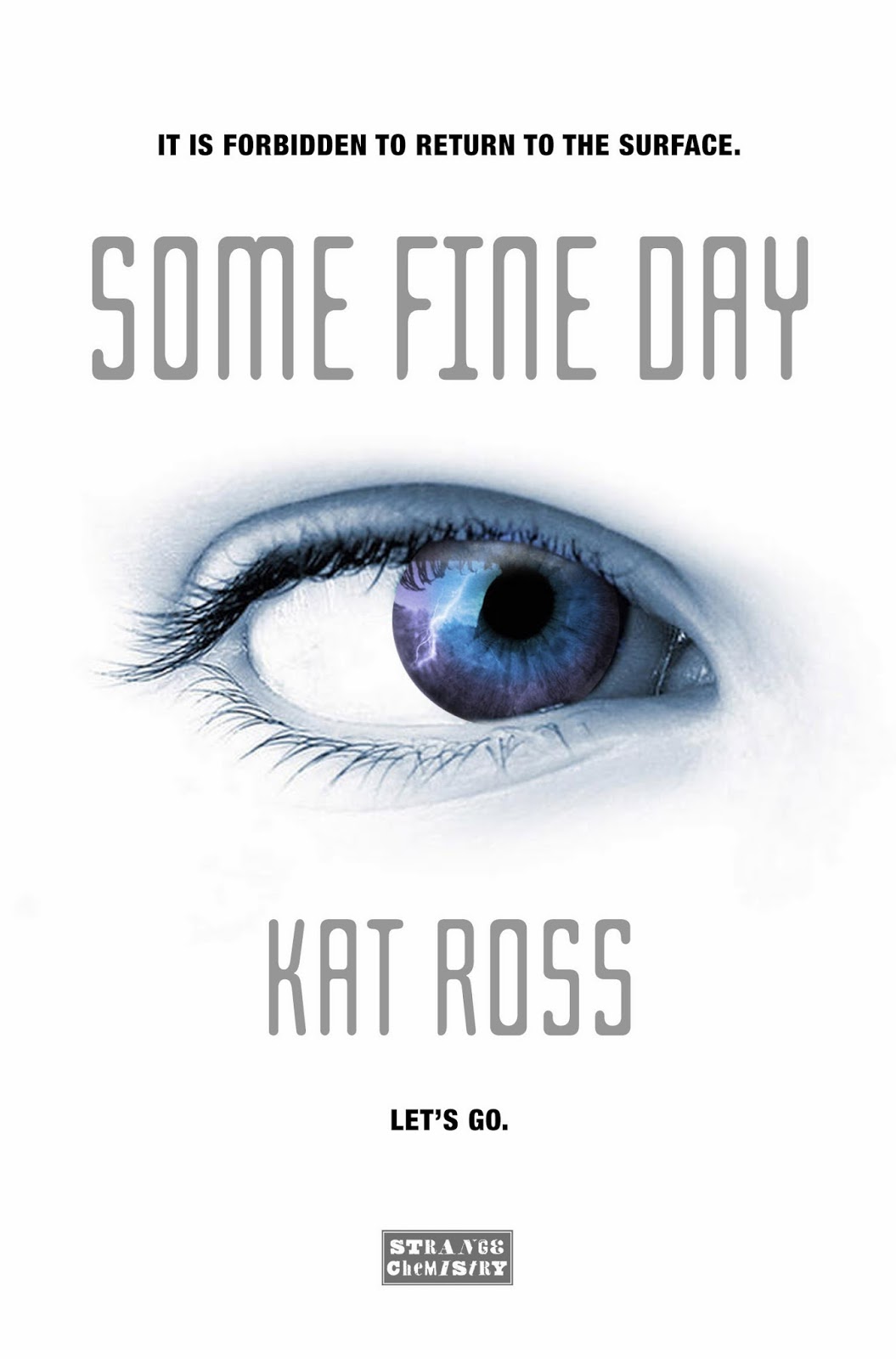 Sixteen-year-old Jansin Nordqvist is on the verge of graduating from the black ops factory known as the Academy. She's smart and deadly, and knows three things with absolute certainty:

1. When the world flooded and civilization retreated deep underground, there was no one left on the surface.

2. The only species to thrive there are the toads, a primate/amphibian hybrid with a serious mean streak.

3. There's no place on Earth where you can hide from the hypercanes, continent-sized storms that have raged for decades.

Jansin has been lied to. On all counts.

Excerpt from SOME FINE DAY, July 2014 from Strange Chemistry

"Beverage?" the attendant asks, and I thank her and take a soda. We're an hour or so in, and the trip is actually turning out to be kind of boring, just like Captain Dan said.

The red-headed kid is across the aisle on my left, hammering away at a game. His parents are nursing cocktails. The mood has gone from apprehensive to lethargic and half-drunk, by the glassy looks of some of the passengers. The mole is very smooth, soundproofed as promised, no hint of the rock being explosively vaporized a few feet away. Just a slight upward tilt to my seat.

I doze off, thinking about the sheep and the valley and the sun breaking through the rainclouds. It's become my favorite daydream.

Then I feel Jake's hand on my arm. "We've stopped," he says.

And I realize that there's no hum under my seat anymore. It must have just happened, because no one else seems to have noticed.

We wait. I keep expecting Captain Dan to get on the intercom, but he doesn't. Half the passengers are asleep, the others reading quietly or watching the cane network. Tracking the storms is something of a national obsession.

Then a guy toward the back yells, "It's not moving. Why is it not moving?"

His voice slurs a little, and there's an edge of panic there.

"Now sir," an attendant says, gliding down the aisle with a fixed smile on her face.

But the cat's out of the bag now. A low murmuring begins, as people start to grasp what's happening. The attendant holds up her hands. She's young and pretty and immaculately groomed.

"There's nothing to worry about. The mole ahead of us snapped a rotor on some bedrock. It's being repaired. We expect to be moving shortly."

"What does that mean? How shortly?" The man calls out. He's half risen from his seat. The middle-aged woman next to him, wife or girlfriend, puts a restraining hand on his arm and he shakes it off.

The attendant knows better than to tell him to calm down, which usually has the opposite effect on people. "Why don't I just check with the captain and get an update?" She disappears into the forward cabin.

No one speaks for a minute. I know it's my imagination, but the temperature in the mole seems to go up a few degrees.

"How much air do they carry on these things?" someone asks.

I sip my soda and share a look with Jake.

I don't really want to be the one to say it, but we're all thinking it anyway, so I go ahead.

Jake snorts and looks away, like he's disappointed in me. But before he does, I see a flash of fear.

It happened six years ago. I was only ten, but I remember every detail. My parents tried to shield me, unsuccessfully, since it was all anyone talked about for weeks.

Five moles, twenty-five passengers and crew each. Departed from Black Dome launch station on August the nineteenth. Fair skies above, a perfect window for an excursion to Gallia Archipelago.

The tremors started about halfway up, the mole equivalent of turbulence on an airplane. Ice rattling in glasses, maybe a bag or two toppling from the overhead bins. No one's too alarmed at first. But then they get stronger.

Subterranean quake, six point six in magnitude. The epicenter was two hundred miles away, so the moles weren't just crushed like the glorified tin cans they are. What happened was worse.

The military tried to send in diggers, a smaller, more maneuverable version of moles, to reach the stranded passengers, but the rock was too unstable to get close. Their com uplink still worked, although after a couple of weeks, people stopped talking.

Rescuers got in eventually. They're probably still in therapy…

Pre-order SOME FINE DAY now at Amazon or Barnes & Noble.